A group of young Atlanta businessmen that included Randolph Richardson, Bo Callaway, Ed Noble, and Dillard Mumford headed a group called “Education for Freedom.” The organization’s first mission was to inform community leaders in the Southeast about the military threat to the U.S. posed by the Soviet Union. In 1962, Peter White took over from Mr. Richardson as head of the organization. As the programs expanded, the name was changed to the “Southern Council on International and Public Affairs (SCIPA)”. Then, at the urging of SCIPA Chairman Dean Rusk, Peter and Julia White undertook a study of other foreign affairs organizations across the country. 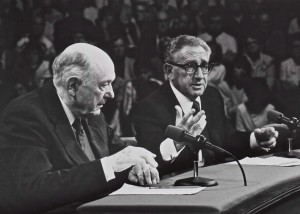 The Southern Center for International Studies has played a vital role in helping Americans understand the world in which they live. As a nonpartisan educational institution, the Center provides a wide range of forums where world leaders, diplomats, and international experts discuss and analyze important issues and events. The greater global awareness promoted by these programs has been crucial in helping corporate and government officials compete in the world marketplace.

In carrying out this important mission, the Center has made a significant contribution to the international infrastructure of Atlanta and the region. During the past 30 years the Center has also made national and international contributions with its annual conferences and public television programs featuring the former U.S. Secretaries of State, Defense,Treasury, Education, and Health and Human Services, as well as world leaders and U.S. Ambassadors to the United Nations. The Center is also reaching out to the next generation of world leaders with educational materials designed for middle and high schools, including materials specially commissioned by the U.S. Air Force. The Center’s World in Transition multimedia educational series forms the core curriculum for U.S. Air Force Officer Training in cultural affairs.

Over the decades, business leaders, government officials, journalists, educators, students, and the general public all have benefited from the broad scope of programs and projects available through the Southern Center for International Studies.